The first 31 days of every year is characterised by two things worldwide; an increase in gym memberships and a fall in tobacco/alcohol sales. This worldwide phenomenon boils down to our love of fresh starts and new beginnings which manifests as New Year’s Resolutions; the closest thing we have to a reset button for life. Watch as people muster up all their will power to commit to a new activity or routine they would otherwise have been unable to do but still believe is good for their lives. Now I myself am not a big fan of New Year’s resolutions however as a man of science feel if you are going to spend the next twelve months hacking at a tree I should probably help you sharpen the axe to increase your chances of success.

Some resolutions require you to set aside time from what could be an already busy daily schedule. This can prove difficult because between work, studying, reading blogs and sleeping, life doesn’t leave you a lot of free time to fit in a new activity. Most of us spend 6-8 hours a day sleeping, this equates to about a third of your lifetime. However cut this down and you could free up precious few hours to pursue your new activity and here is how you could do it and still stay rested.

The first option is called the Uberman Sleep Schedule, and it’s a way to get the maximum amount of essential sleep for your mind without wasting hours of precious time. By taking 30min power naps every four hours, you eventually force your brain to enter REM sleep early than usual. This is the stage of sleep where your brain gets the most rest. Your brain will remain sharp but there is the downside of missing out on all the other stages of sleep where you body is able to repair itself. Admittedly this is a drastic option so here is an alternative; living on a 28 hour day cycle.

This option involves getting your full 8hrs sleep every 20 hours rather than every 16hrs. Sure it means you cannot live your life with the rest of the world and it may really mess up your digestive system (personal experience) but it frees up loads of time to pursue your new interests.

Sleep your way to excellence

If you are looking to learn a new language or sign up for a new course then this one is for you. The exact opposite of my previous tip, it requires you to sleep more rather than less. This is based on evidence that sleeping on what you read can help better your memory retention.

Experiments carried out at Harvard amongst others have contributed to the significance of this notion. For example in an experiment where three groups of participants memorized images on which they were tested for their memory recall after 20 minutes, 12  hours or 24 hours, the group tested after 24 hours scored the highest whereas the 20min group scored the worse. This happens because the brains ability to retain information works via acquisition, consolidation and recall. Of the three stages, consolidation is the most important for long term retention and this occurs while you sleep. This simple experiment goes to show that if faced with an exam what you definitely do not want to do is read over your notes right up to the door of the exam room. This does more to make you feel better about your chances rather than prepare you for your exam.

If you are looking to quit a bad habit then this one is for you. A little known concept called ‘Restraint bias’ which basically suggests that overconfidence in the area of self control leads to exposing oneself to temptation and by so doing falling prey to impulsiveness. This is the reason recovered addicts may relapse even after overcoming the withdrawal symptoms. It doesn’t end there, overconfident individuals are also more likely to get discouraged by setbacks and give up on their resolutions altogether. So if you want to hold onto that resolution till the end of the year start small and when you think you have made enough progress to start exposing yourself again to temptation, don’t…..just don’t.

Have you ever trained an animal? It’s quite simple really, you give rewards to encourage good behaviour and punishments to discourage bad behaviour. It is very similar to how we raise kids and it is also how you will see your resolution through. The brain is like a giant sweet tooth and will encourage you to do whatever needs to be done to get its fix of sweetness. 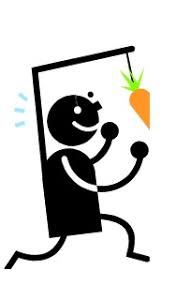 Actually reward yourself, promise of reward is not always enough

The extreme case scenario can be seen in drug addicts who go to great lengths to get their next fix. Drugs are very good at evoking ‘sweetness’ in the brain but other substances can have similar effects. From chocolates to video games and from being in the presence of loved ones to receiving praise, positive reinforcement is how to encourage a chosen behaviour. So whenever you take a step on your path to resolution heaven, reward yourself, it will encourage your brain to make taking the next step easier. Very soon you would have trained yourself to enjoy going to the gym until that in of itself becomes an addiction. It can’t be helped, the brain just enjoys routines and this leads me to the next point

According to research studies, there is great power in being boring. Not in the sense of “an absence of fun” but in the sense of “knowing what happens next by following a routine”. Psychologist have provided evidence that “making choices leads to reduced self control”. Therefore, making repeated mundane decisions can use up your “mental energy” before you even reach the tough decisions like “should I watch another episode of Scandal or read a book?”.

The way around this is to make routine as many aspects of your life as possible, especially the more mundane parts, like what to eat for breakfast and which socks or underwear to put on. If you must have clothes with days of the week stitched on it, go ahead all those gawking at you will soon be awed by how discipline dyou are in other areas of your life. “Waakye Wednesdays” and “Omotuo Sundays” are real things that could make it easier for you to maintain long term discipline and achieve your new year resolutions.

There is no substitute for pure discipline and will power but with these few handy tips you could hack your brain to make will power and discipline a whole lot easier to come by in your life. Wish you all the best and may God help you stick to your resolutions. Now go forth and resolute